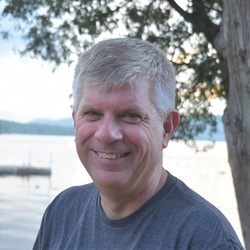 David P. Williamson is the Chair of the Department of Information Science at Cornell University, and a Professor in the School of Operations Research and Information Engineering.

He received his Ph.D. in Computer Science from MIT under Professor Michel X. Goemans in 1993. After a postdoc at Cornell under Professor Éva Tardos, he was a Research Staff Member for IBM Research at the T.J. Watson Research Center in Yorktown Heights, New York. From 2000 to 2003, he was the Senior Manager of the Computer Science Principles and Methodologies group at IBM’s Almaden Research Center in San Jose, California. He moved to Cornell University in 2004.

His research focuses on finding efficient algorithms for hard discrete optimization problems, with a focus on approximation algorithms for problems in network design, facility location, and scheduling. Other interests include algorithms for information networks.


Revisiting Garg's 2-Approximation Algorithm for the k-MST Problem in Graphs
In the Proceedings of the 2023 Symposium on Simplicity in Algorithms (SOSA), pages 56–68, 2023.
DOI


A Combinatorial Cut-Toggling Algorithm for Solving Laplacian Systems
In the Proceedings of the 15th Innovations in Theoretical Computer Science Conference (ITCS 2023), 69:1–69:22, 2023.
DOI


GILP: An Interactive Tool for Visualizing the Simplex Algorithm
To appear in the Proceedings of the 2023 SIGCSE Technical Symposium.


The Circlet Inequalities: A New, Circulant-Based, Facet-Defining Inequality for the TSP
To appear in Mathematics of Operations Research.
DOI

The Two Stripe Symmetric Circulant TSP is in P